Carey Olsen has been named Offshore Firm of the Year at The Lawyer Awards 2018 – having also won the award in 2017.

The back-to-back success marks the third time that the firm has been awarded this prestigious accolade by The Lawyer in the past five years.

The Lawyer Awards 2018, held at the Grosvenor House Hotel in London last night, brought together more than 1,100 private practice lawyers and senior corporate counsel to celebrate excellence across the legal industry.

In the offshore category, Carey Olsen faced competition from six other shortlisted firms and won the award for legal excellence, depth and breadth of expertise, commercial strength, market share, innovation and market-leading strategy.

In the past 12 months the firm has increased its global footprint with the opening of Carey Olsen Bermuda – the firm's ninth international office and fifth legal jurisdiction; continued its rapid expansion in the British Virgin Islands and the Cayman Islands; built on the success of its office openings in Singapore (2015) and Hong Kong (2016) and secured its position as the leading law firm in the Channel Islands with a top-tier ranking across all 17 of its practice areas in Legal 500 UK – the only offshore law firm to have tier one status across the board.

Carey Olsen has been involved in a number of notable deals and cases over the past year, including:

Carey Olsen group managing partner Alex Ohlsson said: "It is a truly fantastic achievement to have won this award back-to-back. We have had another strong year in terms of growth and performance across the board and also increased our global reach with the opening of Carey Olsen Bermuda at the end of 2017.

"What pleases me most is that the award is a ringing endorsement of the calibre of the legal teams and staff at Carey Olsen and recognition of their hard work and commitment to the firm and our clients. I'd also like to take this opportunity to thank our clients and intermediaries for their support in making this such a successful year for Carey Olsen."

Carey Olsen partner Ben Morgan, head of the firm's corporate and finance group in Guernsey, collected the award on behalf of the firm. 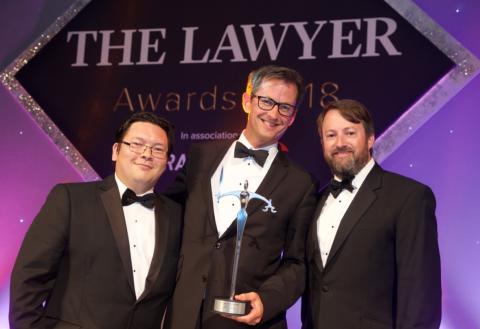