Carey Olsen is Legal 500's Offshore Firm of the Year

Carey Olsen has been named Offshore Firm of the Year in the prestigious Legal 500 UK Awards 2019.

A key legal industry research guide, Legal 500 ranks and grades the world's leading law firms based on a series of criteria that includes feedback from 300,000 clients, intermediaries and practitioners worldwide. The awards are therefore regarded as a benchmark for excellence and aim to identify the standout firms operating in a number of different areas of law.

Carey Olsen's success comes after the firm achieved top-tier status in all 17 of its practice areas for the second year in a row in the most recent edition of the Legal 500 UK, published in October 2018. Carey Olsen was the only offshore firm to achieve Tier One rankings across the board. This was then followed by 20 of the firm's lawyers in the British Virgin Islands, Cayman Islands and Bermuda being recognised in the Caribbean edition of Legal 500, including four as 'leading individuals'.

Testimonials from clients interviewed by Legal 500 as part of its research process saw Carey Olsen described as 'the stand-out firm in the Channel Islands' with a reputation for providing 'the perfect balance of client-handling skills, legal acumen and commercial nous’.

An awards ceremony for winners took place on 6 February at the Great Hall, Guildhall in London. Carey Olsen partners Ben Morgan and Jasmine Amaria, and group marketing and business development director Chris Carpenter collected the award on behalf of the firm. 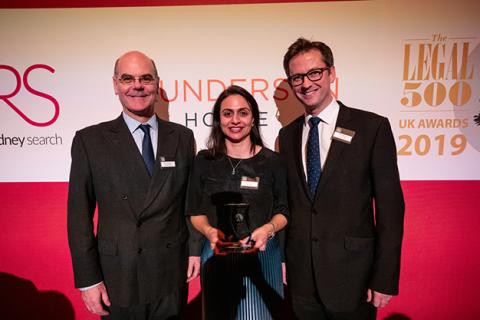