This Starting Point Guide addresses the fundamentals of discrimination law in Jersey.

Carey Olsen Starting Point Guides are intended as a general introduction and guide to different aspects of Jersey employment law.

They are a summary of the most important issues that we come across. They are very much edited highlights of those issues. If you would like legal advice in relation to any specific circumstances, please do give us a call.

Jersey is the largest of the Channel Islands and is a British Crown dependency. It has its own financial, legal and judicial systems. It is not part of the UK or of the European Union (although it has close relationships with both). It also has its own breed of instantly recognisable cows.

What approach to take

There are several areas to consider in preparing for and responding to the Discrimination Law.

In particular, you will need to think about your general approach. Does your organisation want to do what it needs to do in order to comply with the Discrimination Law and no more - or does it wish to consider a more ambitious approach to diversity and inclusion?

The answer to this question is likely to be informed by the size and resources of your organisation. However, it is worth being aware that in many organisations there is a clear business case for engaging more closely with diversity and equality issues – you should be clear about your approach and ensure that you do not lose out on potentially significant benefits.

Who has duties under the Discrimination Law?

All Jersey employers, whatever their size, are covered by the Discrimination Law.

Small employers may have practices that are more informal, have fewer written policies (and HR/management resources), and may be more constrained by financial resources than larger employers, but no employer is exempt from the Discrimination Law because of size.

What the Discrimination Law means for you as an employer

The Discrimination Law also applies in a variety of non-employment related areas, including:

The above areas are not covered by this note – you should ensure that you are aware of your obligations if you are active in any of the above areas.

What kinds of behaviour?

The behaviours which the Discrimination Law prohibits in the workplace are as follows:

Direct discrimination arises when one person treats another person (the “subject”) less favourably than others because of the subject’s protected characteristic (actual or perceived). For race discrimination this includes segregation from others.

Direct discrimination will also occur if the less favourable treatment is due to the subject’s association with someone else who has a protected characteristic. 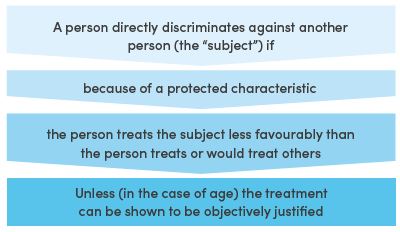 Generally, direct discrimination is not capable of being justified (with certain exceptions such as those connected with Genuine Occupational Requirements – see below under “General Exceptions”). However, if a subject claims to have been treated less favourably because of a protected characteristic of age, in certain circumstances the employer may be able to objectively justify the less favourable treatment.

To objectively justify less favourable treatment because of age an employer must show that the discrimination is a proportionate means of achieving a legitimate aim. 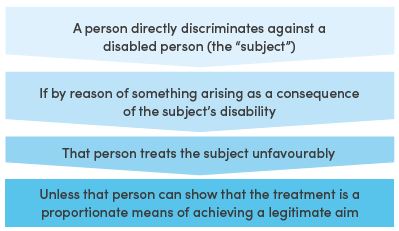 An example of less favourable treatment because of something arising as a consequence of an individual’s disability would be if an employer dismissed an employee for absences that were due to their disability. Therefore employers should be cautious when deciding whether or not to dismiss a disabled employee whose disability-related absences have triggered the organisation’s attendance policy. 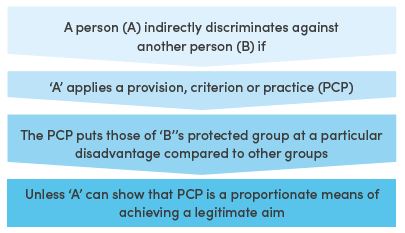 Indirect discrimination can be justified in relation to all protected characteristics as long as the employer can show that the provision, criterion or practice is a proportionate means of achieving a legitimate aim.

In considering an argument related to justification, the Tribunal would need to take into account:

This would apply in the following circumstances;

A physical feature of the premises includes;

To avoid the substantial disadvantage caused, an employer may remove the physical feature in question, alter it or provide a reasonable means of avoiding it e.g. an alternative entrance.

In all cases, it is important to remember that the duty imposed is to take reasonable steps to avoid the disadvantage - it is not a requirement to take all steps possible to remove the disadvantage. What is reasonable for one business may not be so for others. Therefore, when determining whether such steps taken are reasonable, the Law outlines matters that should be taken into consideration, for example:

An employee is harassed if they are subjected to unwanted conduct as follows: 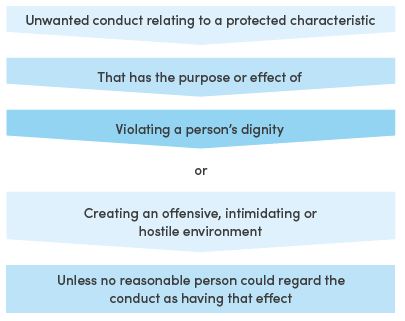 Harassment also includes unwanted conduct of a sexual nature on the grounds of sex, sexual orientation or gender reassignment. It also includes being treated less favourably because of the subject’s rejection of or submission to the conduct.

Victimisation is included in the Discrimination Law to protect individuals against retaliation should they make or support a complaint under the Discrimination Law. A person victimises another if they treat them less favourably or otherwise subjects them to a detriment on the grounds that they have:

There is an exception for complaints made or other acts done in bad faith - but this is rarely used.

Should someone be victimised, they will essentially have a free standing complaint under the Discrimination Law.

Helping or instructing someone else to discriminate

The Discrimination Law makes it unlawful to knowingly help someone discriminate against, harass or victimise another person.

A person who helps another in this way will be treated as having done the act of discrimination themselves. It is also unlawful to help a person to discriminate against or harass another person after employment has ended, where that discrimination or harassment arises from and is closely connected to that employment.

It is unlawful to instruct or attempt to induce someone to discriminate against, harass or victimise another person because of a protected characteristic or to instruct a person to help another person to do an unlawful act. An instruction or inducement may amount to no more than persuasion and need not be applied directly – it can be indirect. Nor does any act need to result from the instruction or inducement.

The only circumstances in which the employer will not be liable for the discriminatory acts of its employees is if it can prove that it has taken all reasonably practicable steps to prevent the employee from acting in a discriminatory manner.

The JACS Guide to the Discrimination Law suggests the following steps should be taken:

An employee (or agent) may be personally responsible for their own acts of discrimination, harassment or victimisation carried out during their employment or while acting with the authority of their employer. This applies irrespective of whether the employer is also liable.

But there is an exception to this. A worker or agent will not be responsible if their employer or principal has told them that there is nothing wrong with what they are doing and the employee or agent reasonably believes this to be true.

There are some circumstances in which it is not unlawful to treat people less favourably.

Religious organisations are permitted to discriminate in recruiting a person to conduct religious services where the employer requires their employees to be of a particular sex, have a particular sexual orientation or to be/not be a transgender person.

An employer is permitted to refuse to recruit a woman where:

Age discrimination comes with a number of exceptions. For instance, age discrimination is not to be prohibited in education, premises and the provision of goods, facility and services to those under 18. There are also certain carve outs for the provision of pensions, employment benefits and redundancy payments. In addition, unlike the other protected characteristics, employers are able to objectively justify an act of direct discrimination as a proportionate means of achieving a legitimate aim.

A person is not considered to fall within the definition of disability under the Discrimination (Jersey) Law based on that person’s tendency to:

This differs from the exceptions in UK equivalent legislation which narrows the scope of the ‘disability’ definition further. In the UK, the following are additional exclusions;

[A] person wishes to install a wheelchair ramp but, in order to be built at an appropriate gradient, the length of the ramp would encroach on to a public highway; and so in order to comply with the Building Bye-laws, the person could not build the ramp…”

However, now that the transitional period has come to an end, any “forced” retirement will run the risk of direct age discrimination complaints being brought together with unfair dismissal claims.

Despite this, an employer will be able to retain a default retirement without incurring liability in respect of age discrimination if they are able to demonstrate that the retirement age is objectively justified as a proportionate means of achieving a legitimate aim.

Objective justification is difficult to achieve retrospectively, therefore employers wishing to rely on a default retirement age should revise their retirement policies and procedures as soon as possible to ensure that their reasoning for the policy meets the legal requirements for valid justification.

Examples of a legitimate aim in this context might include:

In order to demonstrate proportionality, employers must be able to show that:

‘Positive action’ means the steps that an employer is permitted to take to encourage people from groups with different needs or with a past track record of disadvantage or low participation to apply for jobs.

An employer can use positive action where they reasonably think (in other words, on the basis of some evidence) that:

To deal with the three situations, an employer can take proportionate action to:

Making a complaint – the Tribunal

The claim must be made with 8 weeks of the last act occurring. If the Tribunal upholds the claim, it may:

Compensation may reflect both financial loss and a sum for hurt and distress up to a maximum of £10,000.

Within that overall limit, the amount awarded for hurt and distress must not exceed £5,000.

You should ensure that you understand your obligations under the Employment Law as well as the Discrimination Law – looking at either in isolation is not advisable.

The Discrimination Law is undeniably complex. More information is available from the following sources:

The UK sources above should be treated with care – the law is similar in some respects but there are differences.