Held at The Grosvenor in London on Tuesday 27 June, this annual flagship event brings together over 1,300 private practice lawyers and senior corporate counsel to celebrate best practice in the legal industry.

The award follows another year of strong growth for Carey Olsen; now the largest law firm in the Channel Islands with a network of eight international offices.

Carey Olsen has continued its rapid expansion in the British Virgin Islands and the Cayman Islands and has well-established practices in both these jurisdictions. The firm has also increased its footprint in Asia with the opening of the Hong Kong office in November 2016, less than a year after launching its Singapore office.

Carey Olsen has invested in key senior promotions and hires across its global practice and the group’s lawyers have acted on a number of ground-breaking deals and cases in the past year, including:

Carey Olsen managing partner, Alex Ohlsson, said: “It has been another very strong year for the firm. We have seen significant growth and received a number of high-value and complex instructions.

"It is an honour for us to be recognised as 'Offshore Law Firm of the Year' by The Lawyer. I would like to take this opportunity to thank our clients and intermediaries for their support along with everyone who works at Carey Olsen for their hard work and commitment.”

Carey Olsen previously won 'Offshore Firm of the Year in 2014' on the strength of its ground-breaking work in relation to the Tchenguiz Discretionary Trust, one of the largest contentious trust insolvency disputes of recent years. 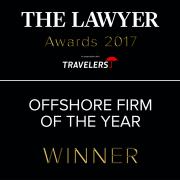