The conflict of laws rules of some jurisdictions do not always determine clearly the situs of intangible moveable property, such as shares in a company (for example, it is not always clear whether the shares are located where the original register of members is maintained, or where the company is incorporated).  However, this is not the case for shares that have been issued by a company that is incorporated in the British Virgin Islands ("BVI Shares"). BVI Shares are regarded as assets situated in the British Virgin Islands (the '"BVI"). This is true even if: (1) the share certificate is maintained outside the BVI; (2) the register or members is maintained outside the BVI; and/or (3) the deceased shareholder has never been to the BVI.

Death of a BVI Shareholder

Putting to one side cases where BVI Shares are jointly owned with rights of survivorship, or held on trust for the benefit of the deceased shareholder (where a more nuanced conflicts analysis is required), a deceased's BVI Shares which form part of his or her estate cannot generally be dealt with (for example, transferred to his/her successors) until the BVI High Court Probate Registry (the “Registry”) has issued the relevant Grant (defined below).

To ensure the correct Grant is applied for, it is important to determine whether or not the deceased left a valid will - and if so, if that will has made provision for the succession to his/her BVI Shares: 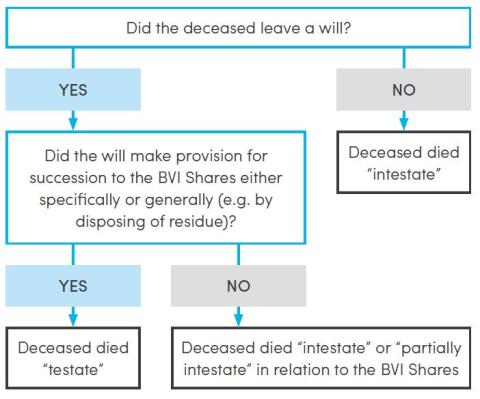 For deceased persons who were not domiciled in the BVI, succession to their moveable assets situated in the BVI (such as BVI Shares) will generally be governed by their domiciliary law. However, the relevant Grant will generally still be required to deal with their BVI estate and effect the formal transfer of BVI Shares to their successors.

Grants of Probate and Letters of Administration

The transfer of a deceased shareholder's BVI Shares to his successors can generally only be effected when: (1) a grant of probate has been issued by the Registry; or (2) a grant of letters of administration has been obtained from the Registry; or (3) the deceased shareholder's foreign grant of probate or letters of administration has been re-sealed by the Registry where such a foreign grant is eligible for resealing (together referred to as “Grants”).

If the deceased shareholder left a will, which expressly appointed particular executors to deal with the deceased's BVI estate (including the BVI Shares), then the executors can make an application to the Registry for it to issue a grant of probate.

Grant of letters of administration

If the deceased shareholder left a will covering their BVI Shares, and a grant of probate has been made in a jurisdiction whose grants are eligible to be resealed by the BVI court (for example, England and Wales*), then the person who has obtained the foreign grant can apply to the Registry in a streamlined procedure to have the foreign grant resealed in the BVI without the need for a fresh application for probate. Resealing applications tend, when available, to be a marginally more cost effective option  than applications for fresh Grants.

To apply for a Grant, the Registry will need, among other things, an original certificate of death or burial (and original will if a grant of probate is required). If the deceased was not domiciled in the BVI at the time of their death, the Registry will also need an affidavit of foreign law given by a lawyer practising in the jurisdiction where the deceased was domiciled. Other certificates (such as marriage or birth certificates, or certified copies of the same) may also need to be supplied. If these documents are not in English, then certified translations of these documents must also be provided by someone suitably qualified.

Applications for a Grant should generally be brought within 3 years of the death of the deceased shareholder, and where they are brought outside of that period an additional affidavit needs to be filed explaining the reasons for the delay. The process of obtaining a Grant from the Registry typically takes three to six months, but may be longer if the estate is contested or if the deceased died in a jurisdiction that has a legal system differing materially from that in the BVI, such as a civil law or Islamic jurisdiction.

If the deceased was both the sole director and sole shareholder of the BVI company, then upon his/her death the BVI company will have no serving director and may have no way of appointing a new director to authorise the registered agent to update the register of members. As a rule of thumb, it is only once the relevant Grant has been issued by the Registry that the person to whom it has been made will be eligible to pass a resolution appointing a new director: and often this can only be done if the company's memorandum and articles of association (the "Articles") expressly authorise the holder of the Grant (or personal representative of the deceased) to pass such a resolution. Where the Articles do not authorise the personal representative of the deceased to pass a resolution to reconstitute the board of directors, it is sometimes necessary to seek the assistance of the court to rectify the register of members before the board of directors can be reconstituted. As a result, the company will often not be able to function for several months, which can have seriously inconvenient implications.

In this regard, we usually recommend that a sole director/shareholder appoint a reserve director, prior to their death, who can continue to manage and operate the BVI company whilst the relevant Grant is being obtained. However, for reasons noted below, a reserve director will generally be unable to transfer the deceased shareholder's BVI Shares without the relevant Grant being obtained, or this could be deemed to be intermeddling in estate affairs.

Given the time consuming and sometimes costly nature of the BVI probate procedure (and the increased risk of a loss of privacy if third parties with legitimate interests are able to get access to the court file), many of our clients seek alternative succession planning options for their BVI Shares. These include:

BVI Shares can be held jointly, with rights of survivorship. On the death of one of the joint shareholders, the BVI Shares will automatically vest in the survivor(s), without needing to obtain a Grant. This option is easy to implement and cost effective. Possible disadvantages include that each of the joint owners will have immediate and ongoing rights to the BVI Shares during their lifetimes, and not just on death of one of the parties and this may lead to deadlock where the joint owners of the shares cannot agree on how the shares should be dealt with. In addition, on the death of the last joint owner a Grant will need to be obtained to transfer the BVI Shares to that person's heirs.

Certain civil/Islamic law jurisdictions do restrict testators domiciled in such jurisdictions from freely deciding who should succeed to the assets in their estate once they have passed (so called 'forced heirship' regimes). There are specific provisions in the BVI trusts legislation which can provide a mechanism for avoiding the restrictions presented by such forced heirship regimes. It should also be noted that establishing a BVI trust can have onshore tax consequences, and so we always recommend that onshore legal and tax advice is sought before setting up a trust as a succession planning mechanism for BVI Shares.

Shareholders can gift their BVI Shares to their heir(s) prior to their death. However, this means they will generally no longer enjoy any voting, dividend or distribution rights that are attached to those BVI Shares. Gifting the BVI Shares in this manner can raise the prospect of clawback claims where the donor is domiciled in a forced heirship jurisdiction, and again such gifts may also trigger onshore tax consequences, so we recommend that onshore legal and tax advice is sought before BVI Shares are gifted.

Though it will not avoid the BVI probate procedures, a conventional succession planning mechanism is for the shareholder to execute a BVI will that allows them to make clear provision for succession to their BVI estate (including BVI Shares) after their death. Because succession to moveable assets and also the formalities required for valid testamentary arrangements are largely determined by domiciliary law of the testator, where the testator is not BVI domiciled he or she would also need to seek onshore legal and tax advice to determine if a BVI law governed will would be effective under the laws where the deceased is domiciled.

It is not possible to circumvent BVI probate procedures by simply signing undated share transfers, powers of attorney and/or nominee arrangements that purport to transfer any BVI Shares in the event of a shareholder's death. Any authority given by the shareholder, to third parties, to date these documents automatically ceases in the event of their death which ipso facto renders such authority invalid. Accordingly, for reasons noted below, any person that dates and acts on such documents without the relevant Grant first being obtained could be at risk of claims for intermeddling in estate affairs.

Dealing with BVI Shares without a Grant

Until the relevant Grant has been issued by the Registry, the relevant BVI Shares are for most practical purposes suspended: voting rights attached to them can generally not be exercised, they cannot generally be transferred or sold, and there can be difficulties collecting dividends paid on those BVI Shares because no-one is in a position to give a good receipt for them. Anyone who deals with, or assists persons to deal with, the BVI Shares without the relevant Grant or in accordance with an order of the court runs the risk of becoming personally liable for their actions when the Grant is eventually obtained as an executor 'de son tort'..

Please do not hesitate to get in touch for more information on the succession planning options detailed above.

*Jurisdictions whose grants are eligible for resealing are prescribed in the BVI legislation.

Please note that this briefing is only intended to provide a very general overview of the matters to which it relates. It is not intended as legal advice and should not be relied on as such. © Carey Olsen (BVI) L.P. 2023.